One Flutter pro board with all surface mount components installed. Headers and antenna connector provided, not installed. The Flutter Pro is for engineers and researchers who want to chose which type of antenna to use with Flutter, and intend to solder the connectors on themselves. The Pro also features twice the RAM and flash memory as the Basic (128K Flash and 32K ram on the Pro). The Pro also accepts up to 24V in, over the Basic's 16V input. All other features of the Basic are the same, including on-board battery charging and security hardware. Full kit contents: One Flutter Pro board assembled, Two 20-pin Headers One RP-SMA Antenna Connector One mini antenna for 915/886MHz Operation.

One Flutter Basic radio board. 64MHz ARM CPU compatible with Arduino software, with onboard long r.. 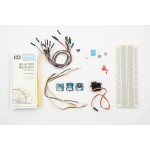 The Flutter Proto Pack is a great way to get started with Flutter! It's chock full of neat things to..